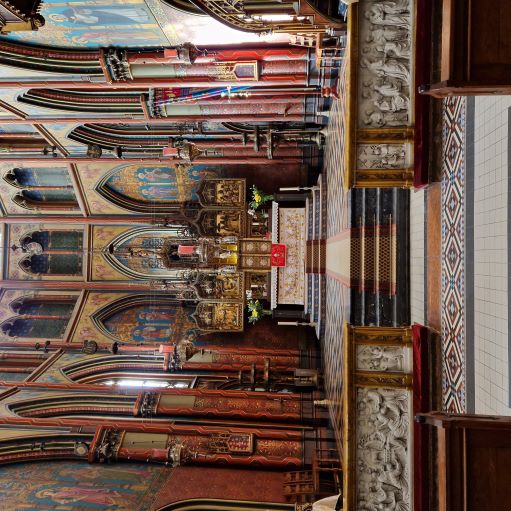 The Mother of God Church (founded under the name "de Onze Lieve Vrouwekerk") was founded as a chapel attached to the monastery of the Redemptorist Fathers on Keizersgracht 218 in Amsterdam. This monastery was one of the first established in Holland since the Reformation and was consecrated on November 5, 1850. The first stone of the church, built next to the monastery, was laid on April 18, 1853. The church was dedicated on November 21, 1854.

Since its founding, Onze Lieve Vrouwekerk has played a distinct role in Roman Catholic Amsterdam. The church was never a parish church, but functioned as a general auxiliary church. From Onze Lieve Vrouwekerk, the Redemptorist Fathers gave a strong impetus to the emancipation of Roman Catholics. Through them a number of devotions, including in honor of Our Lady of Perpetual Help and of the Sacred Heart, and other religious practices were propagated.

These new exercises and customs attracted a large number of churchgoers, not least because of the solemn manner, in which church feasts were celebrated and the rich decorations. For many Catholic Amsterdam residents, this congregation was a special support for their spiritual life. The church was for many years the confessional church of Amsterdam.

The transfer to the Syrian Orthodox
After more than a century of Catholic revival, Amsterdam also experienced a sharp decline in religious life. The dwindling number of Redemptorist fathers and brothers and the low growth of priests, was reason for the Redemptorists to end their activities at Keizersgracht. In 1984 both church and monastery were sold. In May 1985, the church was purchased by the Syrian Orthodox Church. Since the Syrian Orthodox were financially unable to buy the monastery as well, it passed into the hands of a real estate company.

The restoration of the church
In 1989 and 1990, inspections were conducted by an engineering firm on behalf of the Syrian Orthodox Church to get an impression of the state of repair of the building. On that basis, a restoration plan was drawn up to bring it back to an architecturally acceptable level.

Years of penetrating moisture had led to structural deterioration. Most of the shell, namely: roof and facades were in poor to very poor condition. Dangerous situations were also occurring in certain places for the users of the church and also for passers-by on the street.
In order to preserve the church for the present and future church communities, extensive repair or restoration had to be carried out.
Restoration work began on January 17, 1994.

A special computer technique was developed for the restoration of the wall and ceiling paintings. Using photos of the original scenes and motifs, a machine cut out templates; the cut-out figures could then be repainted on the vault or wall.
The restoration work was completed at the end of 1996/beginning of 1997.